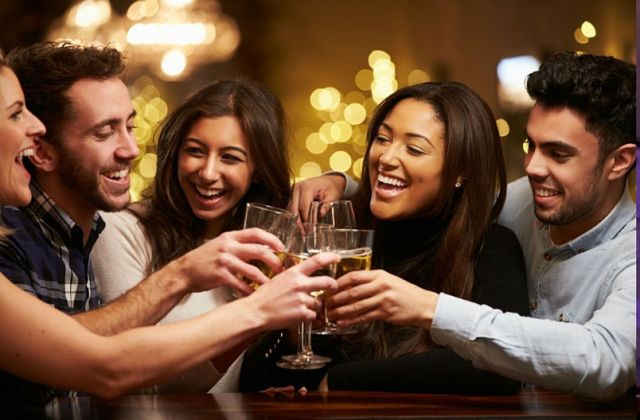 SATURDAY I PARTIED WITH “THE KIDS!” – THE END.

Just kidding! About the “-The End” part, I mean.

For purposes of this story, I’m referring to, specifically, “The Kids” ages 21 to 29 years. The untamed. The energetic. The romantically idealistic ones – sprinkled with just a bit of cynicism and barely crumbs of fear.

Oh…Just, basically, the ones who drink a lot of beer and can buy it for themselves.

If there’s one thing I’ve learned – and, yes, I suppose I’ve learned plenty – in order to keep me on my toes, it’s important to hang with the The Kids. Every now and again.

They keep me up to date

“did you hear that Ashton Kutcher is getting sued for naming his third child Twitter?” “have you tasted that new Ben & Jerry’s ice-cream, Smoker’s Delight?” “Have you checked out the new cable show, Pussy Chasers?”

They keep me young

Plus, through them, I have access to all answers to my oh-so-lame technological questions. Not to mention, the happiness I feel when they “heart” ALL my Instagram photos.

I don’t expect them to find me a date, though. They suck at that.

Would most of my own friends do Instagram, have Ben & Jerry’s Smoker’s Delight at bedtime, or follow Ashton Kutcher’s lawsuit for naming his third child Twitter?  Hell no! Most of them are still back in the time of Monica Lewinsky, Haagen Daz and Afternoon Delight – that song, I mean.

Moreover, the only stuff my friends and I now talk about are kids in college, who tops who with the most frequent hot flashes for the week, and what’s the “best wine ever.” Which, incidentally, changes every week (my friends read my blog). This often times can get  challenging.

Anywayz, I don’t expect them to find me a date, either. They suck at that too.

However, when I sit around with The Kids, my brain gets fired up from:

It’s a Saturday and The Nors (my daughter) has a couple more days left of her brief stay in L.A. She’s planning to go to my Ex’s/her father’s gig tonight. I’m planning a quiet evening at home. This will be my Ex’s/her father’s first gig that I won’t attend. His girlfriend says, “I don’t want her there.”

My plan? Me, Netflix and a bottle of Wine. Not to mention the good cry I need to fit in there somewhere too. I’m long overdue.

“Mama, can I invite friends to come over for a drink before the gig?”

The Nors buys the beer. Mama buys a couple bottles of wine.

“Buzzzzz…” in through the door walk 2 Marrieds, one Tall-Guy, plus a Surfer slash Grunge slash Polite Canadian kinda guy who I have never ever met before – ’cause he’s from Connecticut.

Like a freshly hired black jack dealer trying to gain confidence over her crowd, as they sit down at the table, I slide one, two, three, four, five coasters out to The Kids, purposefully hitting hard each hand as to say “Set those beers on those coasters or die.” But that’s the last they’ll see of “Mama” for the night. I join their crowd.

By this time, the apartment is filled with such boisterous chatter that a passerby would think we’re running some kind of trendy L.A. nightclub.

As I’m drinking my 1st Glass of Wine, we talk about travels which develops into the history of the Cobb at Lyme Regis, which turns into a discussion about the American translation of the British word “Cobb,” which morphs into googling words that-we-think-we-think-we-know-but-then-find-out-we don’t. I guess I’m in the company of writers.

The Nors replenishes me with a 2nd Glass of Wine without even asking.

“If you had to be a scientist, what kind of scientist would you be?” poses the Tall Guy.

“I wanna be a forensic scientist!” I say enthusiastically, making sure I can fit into their crowd. I mention my strong desire to camp out on the hillside of the University of Tennessee where there holds acres of decapitated, burned, buried, chopped up, and left to the elements donated-to-science bodies. “I’d like to participate in those studies.” I wait for the shock on their faces. Nothing. They think I’m kidding. Actually, I’m kinda not.

By the 3rd Glass of Wine, The Kids are trying to persuade me to go to that Gig.

By this time, there’s no question that I’ll say Yes! And I say Yes! then 20 minutes later two Ubers are dumpin’ 5 Kids plus a Mama out onto the front sidewalk of an Irish Pub. I never thought I’d see that bouncer again who always greets me with a big smile and a “Hey you’re back!” But as I rush a bit nervously to his opened door, a couple of The Kids pull me back.

“Hmmm. Aahhhh…. Yes?” I feel I need a little bit of something between that 3rd glass of wine and my next drink to make me feel cool and collected before I run into the Ex’s “I don’t want her there” girlfriend.

Not being a smoker, it takes The Kids three times to light me up. I try to settle into the smoker’s stance – left hip out – right arm up – cigarette firmly resting between the index and middle finger. After I finally get that down, I bring the cigarette to my mouth but I can’t quite figure out where to place it on my lips. It feels awkward. I know how to smoke it, but how do I hold it to my mouth where I look like a chick who knows what she’s doing? So I keep shifting my body, my hands, the cigarette in my mouth, trying to fix things – still feeling un-natural, un-cool, un-sophisticated. What’s worse? I can’t even look trashy! So by the time that cigarette is half gone, I throw it on the ground, stamp it out, and brush it to the side before anyone notices this is not for me.

After I walk through that door, it’s a night of 2 mandarin vodka tonics with limes, photo ops, uncomfortable Ex friend catch ups, crazy dancing, plus a No-Show from the “I don’t want her there” girlfriend.

We close the place down and no sooner than 2 am we are in those Ubers heading home.

Everyone is starving. Being someone who finally is getting used to cooking only for herself, my fridge is empty so The Kids order two large pizzas before their 2:30 am closing.

What happens next reminds me of …

Hannah:  Actually, not a child. I have more experience with this stuff than you do.

Hannah:   Yes, really. I was in a relationship with a gay man. We broke up. I’ve been navigating the choppy waters ever since.

Hannah:    I brought my wallet here.

Hannah:    (sheepishly) I came here from the gym.

“Karen – where’s your credit card?” and right then I’m bounced right back into being “the adult” again. The pizza arrives, everyone chows down, and now it’s reaching 3 in the morning. I know my reality the next morning won’t be me jumping out of bed, ready for the day.

But The Kids’ reality will.

I excuse myself and put myself to bed.

That very next Tuesday I find myself sitting on couches in the lounge of some hip restaurant in the company of a few people I have just met. They’re 15 to 20 years older than me. As we’re having political conversations, philosophical conversations and intellectual discussions about the play we just saw, I can’t help but notice their “Kid” in their eyes…

…and I think to myself…

Just a girl tumbling through Midlife with one Motto to Live By - Yes!